Fascination with Fascism: Japan and Germany in the Indies of the 1930s 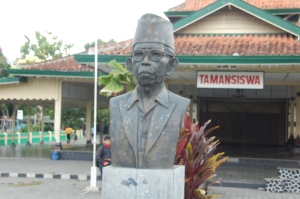 Japan’s victory over Russia in 1905 was, as widely known, an eye opener for other Asian nations, especially those who were still colonized. At last fellow Asians defeated the white race, so it was perceived. Japan became a model and the interest in the country of the rising sun extended well until the 1930s, a different period in Japan as it embraced fascism. Information and knowledge about Japan filtered through to the Indies mainly through publications in Dutch, which, in turn, originated from Germany. This should not be a surprise, since, not long after the Meiji restauration in 1868, a close relationship had been established between Japan and Germany. In the Indies admiration for Japan grew into fascination for Germany too.

Ki Hadjar Dewantara, leader of the educational institute Taman Siswa and father of the Indonesian national education, admired Japan for its tradition of Kokka or “to govern a nation as a family”, as published in Wasita, one of Taman Siswa’s periodicals. As an educationalist Dewantara emphasized the importance of family, which he considered as sacred and therefore adopted as a basis for Taman Siswa. At least in the 1930s Dewantara educated his pupils as if they were brought up in a family, the so-called Among System.

In 1930 Dewantara was also elected dictator of Taman Siswa. This was actually his strategy to face Dutch colonial authority, which was determined to shut down Taman Siswa. Taman Siswa was considered one of the so-called “wild schools”, because they rejected government subsidy and subsequent control. It turned out that as a dictator Dewantara succeeded in putting the colonial authority’s attempt to shut down Taman Siswa on hold. He also succeeded, for the first time ever, in uniting nationalist organisations in the Indies. This means there was no urgency to replace him as dictator. At best there was a change of title, from dictator into general leader. 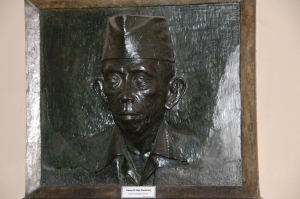 There are some striking continuations between Dewantara and Soeharto. First and foremost Dewantara wanted to have a strong leader, and Soeharto was indeed Indonesia’s strong man during his 32 years of Neuordnung. Dewantara was also one of the authors of Constitution UUD 45, which Soeharto used to rule with iron fist. Soeharto also governed Indonesia as if he presided over a family. Not only did he confuse being head of a family with being head of state, he also did not give opposition a chance. Dewantara rejected division between employers and employees. By applying the Pancasila labour relations, Soeharto, in effect, prohibited labour unions.

In Dewantara’s fascination with pre-war Japan and Germany, we discover the origins of Soeharto’s dictatorship and also, perhaps, a history of the Indonesian Right.

This site uses Akismet to reduce spam. Learn how your comment data is processed.